The blue tongues of La Rambla ... 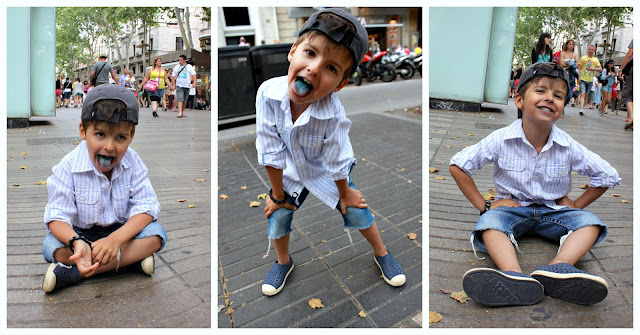 It's hard to keep up this blogging thing especially when you are having fun every single day and all you want is to come home, stick the kids to bed and read your book (I've read about 10 pages so far ..) ...

Here is the account of what have we been up to as LoLo would be describing the experience ...

***
We've been getting up late every morning because mom and dad can't really get us to bed at our usual 8pm bedtime. So, we wake up late, we eat late and by the time we get somewhere it's time for lunch. We went to La Boqueria market ... Lola wanted to wear her flower girl dress very much and mom has already given up explaining that there are no more family weddings that we can attend,  so she paraded through La Rambla street as if she was performing. (In case you are surprised why she is wearing her fancy dress on these photos).

We were excited to see the street performers like we were told we would, but there wasn's a single one out there. What there was though, is ice cream! Every corner had an ice cream shop with as many flavors as you can get at Uncle Lou's in Park Slope (but maybe they had even more).
I asked for the blue and London wanted the same right away. Mom just rolled her eyes and looked at dad who then said very quietly "Well, it's their vacation too! Let them have it!" ... Then mom rolled her eyes again and asked for two scoops of "helado azul" with cones and cups - just the way we like it ... We could tell mom was terrified of all that blue food coloring and flavoring ending up on our clothes (and stomachs), so she kept a close watch over us.

La Rambla was full of people and souvenir shops of all kind. We passed by the National Theater and went to La Boqueria, which is a big, no, a HUGE market in Barcelona.
As soon as Lola sew food, she said she was hungry (I knew she would say that when I sew the candy display ...). I like candy also, but I just ask for it like this .. "Mom, can I have candy?!" but Lola does it in a more confusing way, so sometimes we end up looking for "real" food, then we find it, buy it and then she says that's not what she had on mind, but rather some sort of sweet treat. 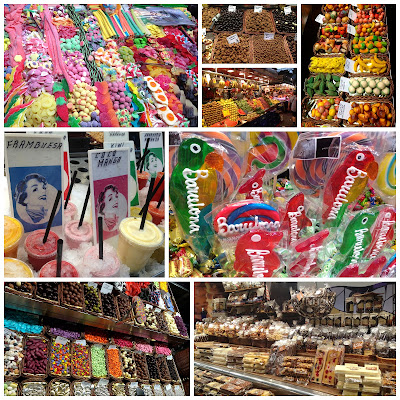 We were picking out candy for so long .. London can never make up his mind ... 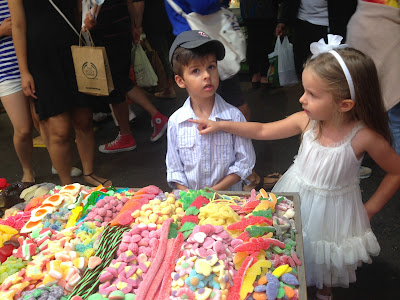 The fruit stalls looked colorful and delicious.
Mom bought strawberries and dad bought mango and mango turned out to be a better choice, because it was sweet as honey and we love honey! 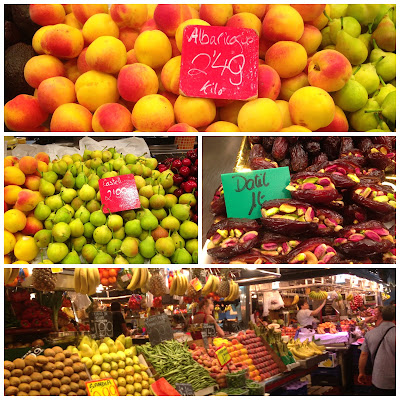 We liked so many stalls - the candy, the chocolates, the fruit, the spices and even the fish and seafood counter, but the meat counter was a little scary! There were things with eyes looking at us and things that even mom and dad would not eat - like stripe (I mean tripe)! Although, dad ate tripe soup once, because it's mom's cousin's husband's - Tibi's favorite dish and dad was scared to refuse. Seeing tripe up close behind the window made his dislike grow stronger ...
We agreed that it looked "yucky musch" and a little bit like beehive carpet.
We also sew a heart and tongue and can not believe how big they both were.
Cows must be super loving animals to have such a huge heart and must be able to eat all their food super fast with such a long tongue! 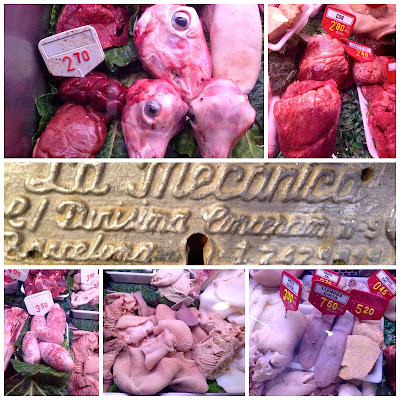 We were also curious about the spices display. Mom took a photo of a strangely neon colored pile of yellow not knowing what it is. All the rest of the names of the spices sounded somewhat familiar and romantic - like out of a famous cookbook, but this one was strange ... "colorant alimentari" said the label. Only a few days later, when she ordered paella in a restaurant and it tasted terrible (but was beautifully yellow) did she realize that this "spice" is in fact food colorant used in cheap paella across Barcelona. She is still upset about this .. what a spoiler to find out that yellow rice is yellow many times not because of the fragrant saffron, but because of some manmade color?!!) 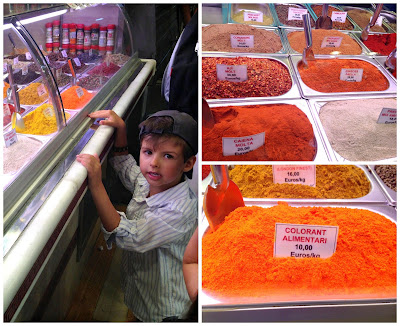 At the exit we bought some "jamon" and bread on a stick and mom got an idea of doing the same for our next year's birthday, which is still far away, but it's good to have inspirations (she says). 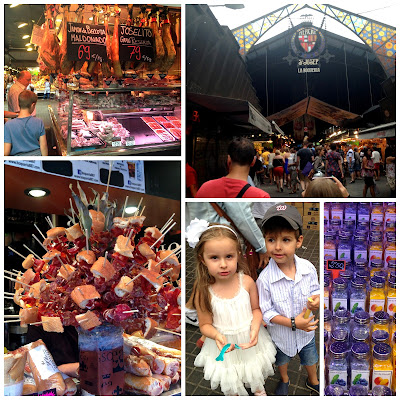 Our next stop was a book store, where we bought Barcelona guide books for kids. One is in English and the other one in Spanish and it's all drawn like a cartoon. Mom and dad said they would buy books like that in every country where we visit, so that we will remember our trips.

We made a quick stop on Placa Reial and bought these light things that you can shoot up to the air.
We had a party with them at home after we came back and you can see how we can boogied HERE .

More adventures to come!!
Hola from Barcelona! The word of the day is "SORTIR" which means exit (we think :)

Email ThisBlogThis!Share to TwitterShare to FacebookShare to Pinterest
Labels: Travel

Mom and dad wanted to do something cultural today, but we still insisted in the "toes in sand" and beach so they compromised. They said we would take a cable car ride, have lunch on the top of the hill, come back and play in the sand. They also promised to buy us sand toys, ice cream and pretty much anything we wanted as long as we can last through the day without drama ...

It all started really well because there was no line at the "teleferico" (as they call it here) ... 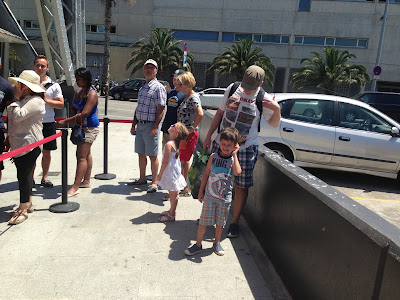 We took the elevator really high and looked around. We saw the beach from above with all the naked people sunbathing and the sail building on the other side, where we ran around yesterday. 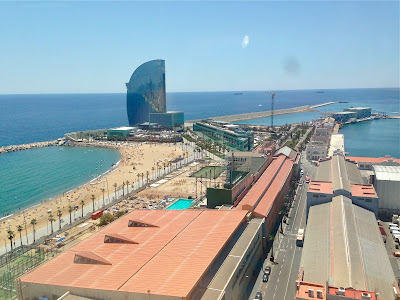 Above us were these huge yellow rings and mom said she thought they were part of the mechanism that makes the cable cars move along ... (Though she has no idea about anything mechanical we think she was correct this time .. I mean there were no hamsters around ... ) 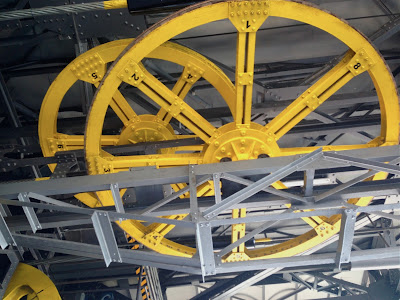 By the way, our exchange family friends told us that going on the teleferico was a very touristy thing to do and most barcelonins have never been or been maybe once in their lifetime as a part of a school trip. Mom said it must be like the Empire State Building for New Yorkers.

Then the red car arrived, we went inside the little cabin, doors closed and swiiiscchhhh it was like on a giant slide but down the rope. We enjoyed the view so much, we giggled all the way up.
We found out that the journey was 1330 meters long till it reached Monjuic. 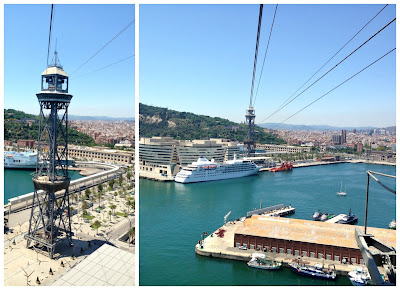 There was a beautiful restaurant at the top of Montjuic with amazing views of the city. You could see the ocean on one side and the city with tall buildings sticking out on the other side. 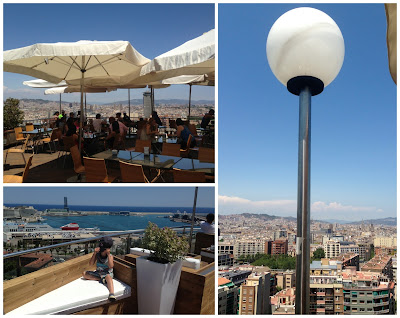 Mom looked at the menu and she could not believe her owns eyes! There was a different price for all items depending on where you sat. The ocean view was more expensive ... 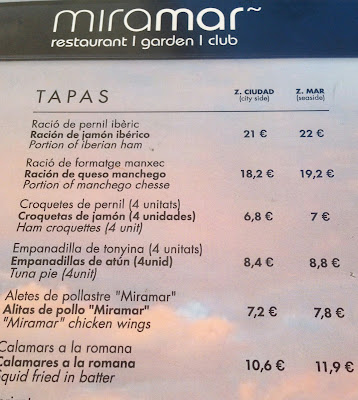 Then Lola threw a huge fit because .. because she was tired and she really wanted to play photographer with mom's I-phone but mom would not let her.  Look at Lola's huge smile ... 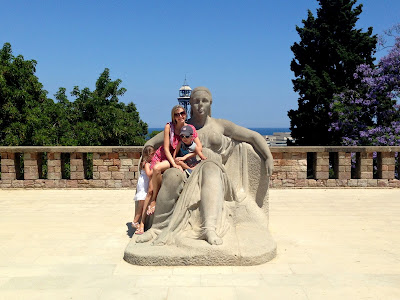 The purple trees in the gardens had beautiful flowers ... they did not smell, but we took many photos of them anyway ... 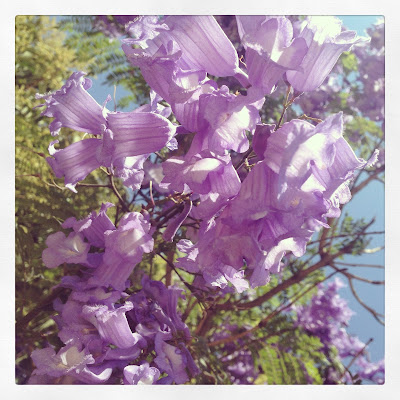 Then it was finally back to the cable car 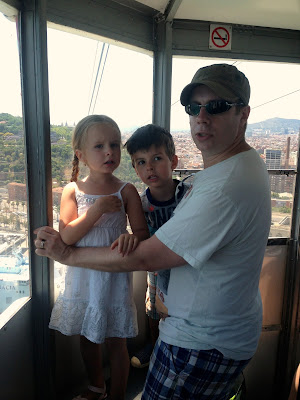 to the beach and sand!!! 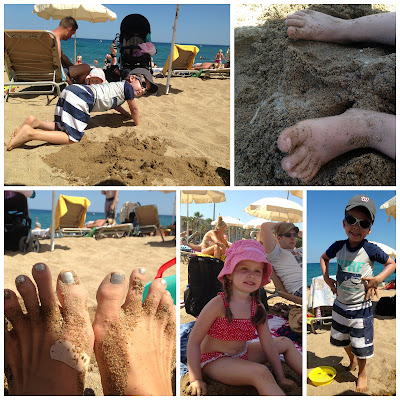 You must all know by now, that mom has this internal need to always do something and create. After a while we got bored filling our buckets with water and spilling them out so mom decided to do some painting with rocks (Barcelona beaches are rocky), which is very funny because the one thing she can not do is paint ... We did rather well though and "painted" a house, a car, a giant flower and a tree ...  (that's basically her entire repertoire in stone on sand people!) 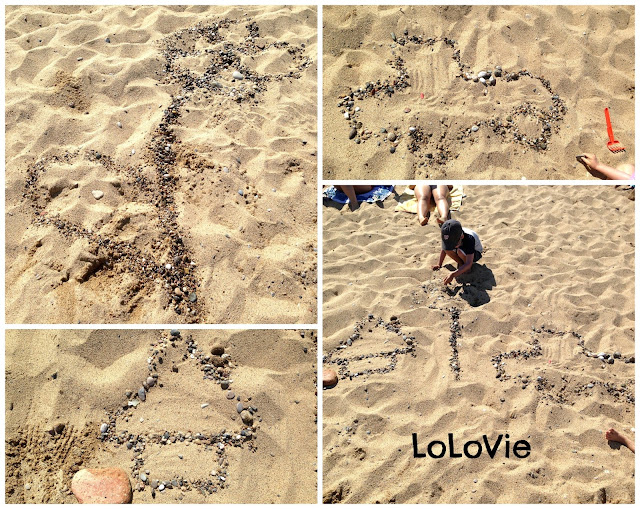 We barely made it home in a taxi. Mom and dad had to carry us into the elevator and we collectively collapsed in front of the TV and Peppa the pig!