Email ThisBlogThis!Share to TwitterShare to FacebookShare to Pinterest
Labels: LoLo 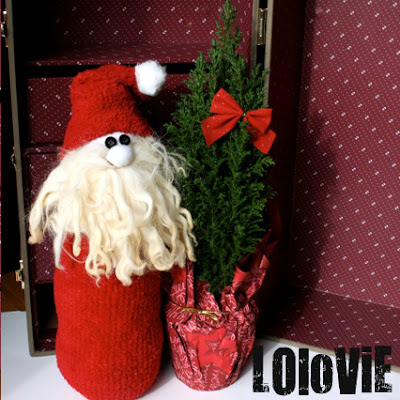 LoLo is in love with Santa, but who wouldn't be? A guy in red with a fuzzy white beard, two big eyes that brings gifts? Just like daddy! (Uhmmm  ... almost  :)

What's great about this project is that even the smallest children can help with it plus the steps can be also used to make sock snowmen.

Step 1.
Take your knee high sock (as shown by Lola on the first photo) and cut through on two places. Straight line just above the heel and straight line below the heel. Now you have two pieces of the sock - one long for the body and one short for the hat.

Step 2.
Take the long part (body) and a rubber band and pull it all together to make a little sack. (photo 3 left to right) ... Turn it inside out (photo 4)
Fill the bottom with rice and stuff the rest with polyfill all the way to the top (as seen London doing it on the photo) and the next picture of our kitchen table and LoLo woking hard ...
While stuffing the sock arrange the polyfill evenly - you may make your Santa as thin or as overweight as you see suited, or as much as the sock lets you. In any case, do not under-stuff the guy! When it comes to Santa and body image it's a very healthy one! ;)
Close the top of the stuffed red sock and put another rubber band over his head twisting it at least twice to make a head.

Step 3.
Cut off the heel and the toes of your single white sock. Now you have a tube.
Make a little ball from the polyfill and take your small rubber band.
Put the ball against the inside of the white sock leaving enough space for the face. Secue the ball in place tight. Pull the white "face" over the red sock head as seen in the last photo.

Step 4. (not pictured)
Take the toe part of your red sock and put a rubber band over the toe part to make it look like a hat. I also glued a cotton ball to the end of it. Pull on Santa's head and sew or glue in place.

Step 5.
Glue eyes and the beard in place .. VOILA! 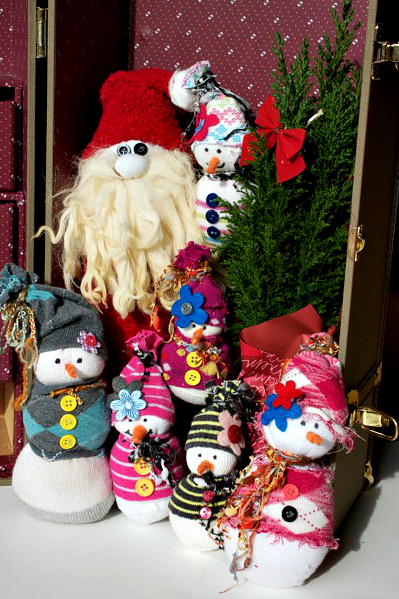 Here he is with his sock snowmen family.

The inspiration for the sock snowmen came from here:
Then She Made ...

The tiny once are not filled with rice, because I will be using them as a tree decoration. I try to make special ornaments every year from LoLo's stuff .. For LoLo's first Christmas I made ornaments from their momma-made patchwork blocks, last year I made a bunch of ornaments from their second year birthday cards (using a scallop hole puncher) and this year everything is sock and tights made! :)

I brought the project to our group "Bobita" which is a Hungarian children's group here in Manhattan and look what we've all made .. 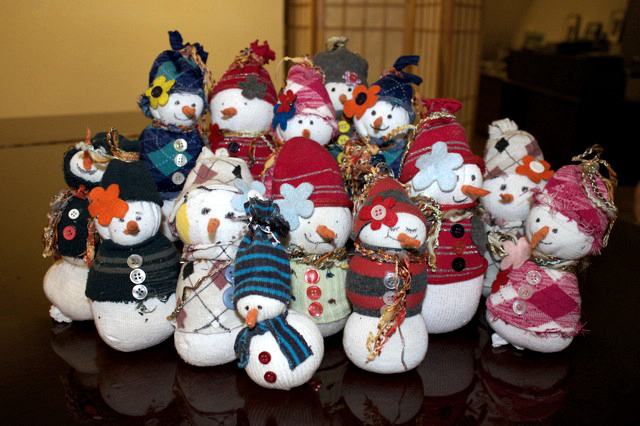 If you make some of these cuties, please send me an email or a Facebook message pretty please ...
I would love to grow the Santa/Snowmen sock family.

Have a wonderful week everyone!

P.S. I just thought about this one .. How about hiding a gift inside Santa's belly? Yes, he would have to be operated on, but still a cute idea, no? Or a marriage proposal from inside Santa's belly .. Hmmm .. OK, before I come up with more strange stuff .. bye byeee
Posted by Elvi at 7:53 AM 4 comments:

Email ThisBlogThis!Share to TwitterShare to FacebookShare to Pinterest
Labels: toys

December must be the craziest month for all crafters considering all the presents to be made. I have a long list that will last 5 Christmases. I start and never finish many, but this one I did! I made an advent calendar for LoLo.

It's really a knock off calendar of the one I saw in a magazine for 95 USD, so I don't deserve much creative credit ... but if you really can't hold it back that's also ok with Moi ;o)

Last year I bought LoLo a paper calendar for 99 cents at our local food store and that worked just fine (in terms of developing chocolate addiction, especially when it comes to London), but I also thought it' would be just nice to hang something cute in their teeny-tiny room and make it even more colorful and festive ...
I found a mitten pattern online and made it to fit the page to print. Then I cut out a 48 pairs of colorful mittens. Instead of sewing, I hot glued the pairs together and tied them on a ribbon. Too much work if you ask me, but all worth it! See for yourself ... 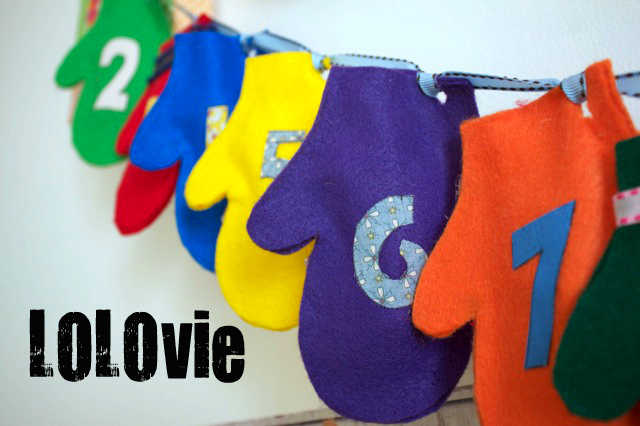 This is how they all looked on our kitchen island ... 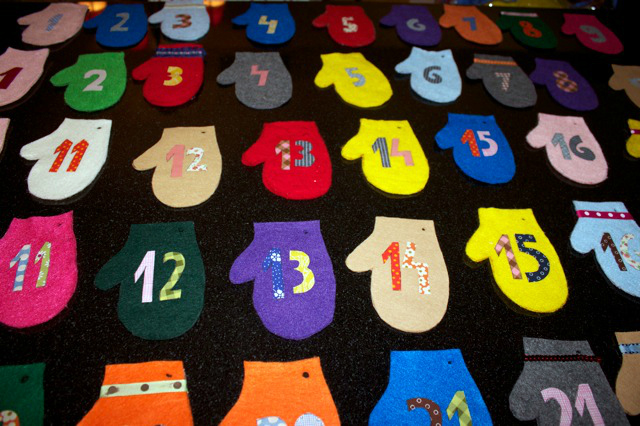 I cut corners on this project where I could - can you tell? :) I really didn't feel like tracing the numbers so I didn't - they are all just hand drawn out as it came. I used fabric scraps from my Romero Britto project, which had double sided adhesive on already. All I did was cut, glue and iron ...
Pretty easy, huh? 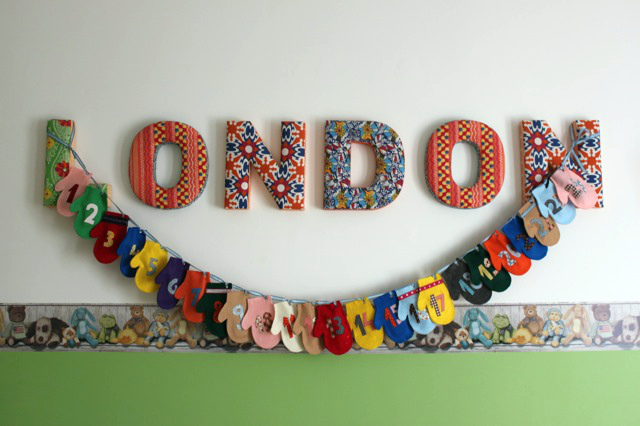 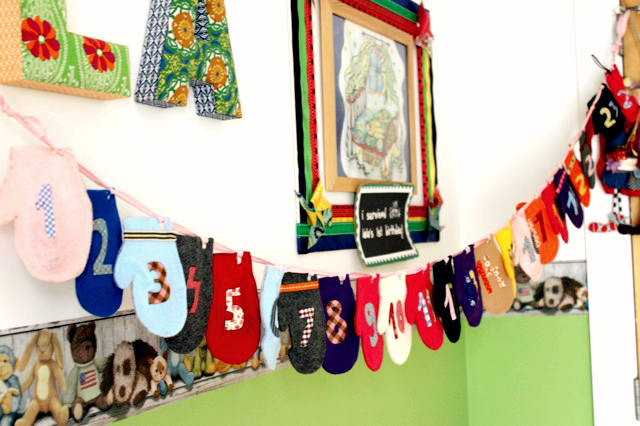 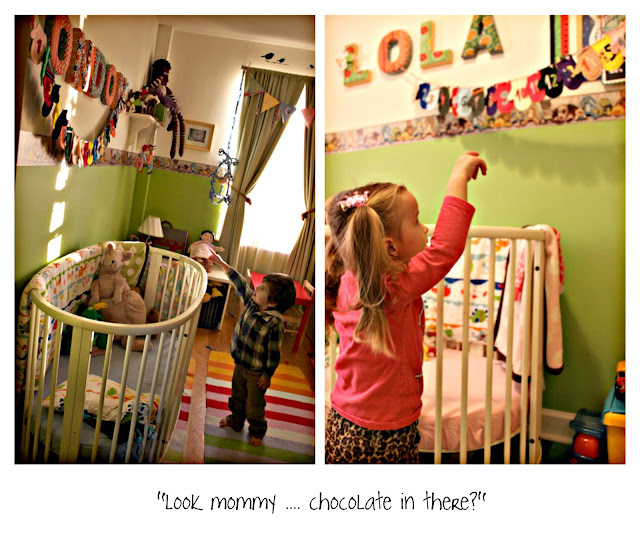 Yupp .. almond kisses and Chanukah gelt for eight days because we celebrate all the holidays where we can eat, drink, be merry and get presents and chocolates ;) ...

Happy Christmas/Hanukkah shopping everyone! LV
Posted by Elvi at 9:20 PM No comments: